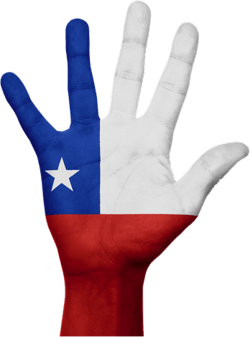 Raise your hand if you are already onto the recruiting potential in Chile. On the fast track as an emerging economy, Chile is attracting more attention from the international community. Chileans see value in receiving an education and gaining relevant experience abroad. Chile’s movement toward a more global perspective will likely help recruiters enhance their recruiting capabilities in the country.

While small by many measures (a population of nearly 17M people and just 8,000 students studied abroad in 2012), Chile's economy has seen steady and consistent growth for the past 35 years. That trend has slowed a bit recently, but the long-term trend is still up and impressive.

Our long-term readers will recognize the approach this post takes to analyzing a specific country and its potential for international student recruitment. In other posts, we've focused on many Asian and Southeast Asian countries. We thought we'd look to the America's today. And with this post we offer one last plug to the lastest research we will be presenting at the upcoming AIRC and ICEF conferences in December. There are still a few slots left for our 3rd annual ICEF Pre-conference Global Marketing Seminar for Education Institutions.

Bottom Line: While some challenges stand in the way of attracting Chileans to the U.S., 2,513 Chilean students chose U.S. institutions in 2014, as reported by IIE's latest Open Doors Data. The common barriers to international education (language and financial constraints) are beginning to be removed and the U.S. is becoming an increasingly attractive education destination for young Chileans. Well crafted social media campaigns and a solid agent network are likely your best bets for reaching those seeking to study abroad. An ESL program or other language support is going to be an important element for U.S. institutions recruiting from this region. Finally, we recommend focusing on your institution's strongest graduate level academic programs rather than diluting your message by promoting your university overall. Be bold and clear with what differentiates your institution.

Now, let's turn to Emily so she can tell us what time it is in Chile...

So, what numbers are U.S. institutions pulling with Chilean students? Let’s break it down. With numbers just below Peru and Colombia, Chile ranks in the top Latin American countries for student mobility. 2,513 Chilean students chose to study in the U.S. in the 2014/2015 school year (find the report HERE). A 3.3% increase over last year. Overall, IIE tells us that Latin American and Caribbean students increased their interest in studying in the U.S. pretty dramatically this past year, up nearly 20% in 2014 to 86,378 students in total. EducationUSA reports steady growth in student mobility from Chile over the last few years. Note that roughly 75% of the Chilean students coming to the U.S. are seeking study at the graduate level (IIE Open Doors Data).

So, how do you reach Chilean students? Well, it’s much the same as how you reach young people anywhere. Social media is taking over and it will get you far with Chilean youth. But, don’t think for a second that the changing social, political and economic climate has reduced Chileans’ focus on real (as opposed to digital/virtual) relationships. While social media can help you make contact and raise awareness, building a relationship with your prospective students and their families is still the key to recruiting in the country.

With a steadily increasing number of students coming to the U.S., what else differentiates Chilean students from others? Perhaps, the most important difference is their passion for quality education. Those of you who have been following Chile know that students began protesting the country's educational systems in 2011. Even with proposed and upcoming changes, students who feel their demands have not been honored continue to protest.

On the flip side, some parents are protesting the very changes that students worked to bring about. With student groups concerned about unfair education institutions, and parents concerned that public education will be subpar for their bright young students, it is understandable that some students are choosing to look outside of the country for their education.

I checked some research sources here where I'm living these days. The Netherlands Organisation for International Cooperation in Higher Education (Nuffic) reports several other changes in the last several years that make Chile a prime location for recruiting. Economic growth and stability throughout the country in recent years has led to increased opportunities for young people. Studying abroad is one of those opportunities. In general, the number of young Chileans pursuing higher education is increasing. And the number of postgraduate degree seekers has quadrupled in the last 10 years placing a burden on existing Chilean institutions that may not have enough openings, which may make students more inclined to look outside the country.

In addition to internal economic changes, political changes have sparked interest in international education as well. Financial concerns are among the most common hindrances to students’ ability to study abroad. In 2008, President Bachelet initiated Chile’s Bicentennial Fund for Human Capital Development which gave 5,000 Chilean students the opportunity to study abroad in the first two years of its existence (see Nuffic’s report HERE). The Chilean government also established, and invested $6B in, the Becas Chile Scholarship. The Becas Scholarship allows master’s, doctoral and postdoctoral students studying energy, biotechnology, IT, environment, health, education, science, or engineering, to study abroad. The most common destination? The United States, of course!

And now the 75% graduate level figure makes total sense. Where the funding incentives go, so go the international students.

Chile’s current government promotes international destinations for higher education and so do the country’s higher education professionals. International Consultants for Education and Fairs (ICEF) shared a Transformations in Latin American Higher Education (TRESAL) survey back in 2014, further highlighting the push for more students in this region to take their studies overseas. The survey shows that almost half of the university leaders who responded considered “student mobility an essential aspect of internationalization” and one in five believed that studying abroad was “a crucial factor for success in the labor market.”

Challenges to recruiting in Chile are largely language centered. While the global mindset is in place, English skills are lagging behind in Chile. In 2012, 18% of Chile’s 11th graders scored proficient or higher on the English portion of that year’s standardized test. Still, the majority of Chileans feel that English helps employability and 48% of employers consider it essential. These views, along with push from the government for students to reach a B1 level by graduation may help break down language barriers, and encourage students to learn English in native-speaking countries. In the meantime, ESL programs will be a strong draw as part of any U.S. recruitment program.

Language challenges aside, how do you attract bilingual students to your campus? Two points seem to be common in research about young Chileans. Taking advantage of social media is essential, as well as building personal relationships with students and their families.

Pew Research Center released a 2014 report on Internet and mobile technology usage in emerging nations. This report found that Chileans are largely present on social media, especially students. Chileans primarily use Facebook and Twitter and are highly visual on these forums. The report found that 67% of Chileans say they regularly take photos and shoot video with their phones. This should indicate to you the importance of using visually engaging content on your institution’s social media pages. Some of the other findings in the report included:

Shifting from the virtual to the real world, focusing on prospective students’ family and true relationship building is highly important when recruiting in Chile. OK Educational Travel Group chairman, Pablo Jorquera suggests that visits to Chile allow recruiters to take advantage of Chileans’ desire for personal contact. Prospective students and their parents prefer a personal touch and Jorquera suggests that working with agents that you trust in the area can help you provide that for your recruits. Earlier this year, Jorquera told the ICEF Monitor “We work with people, not products.” Personal messages and sincere exchanges go a long way when recruiting in Chile.

The growing demand for education from young people, the globalized mindset of the nation, the increased financial resources and local concerns about Chile's education system make study abroad attractive to young people. English may still be a challenge for some Chileans hoping to study abroad, but motivation is high in Chile. In his conversation with the ICEF Monitor, Jorquera made a compelling argument for recruiting these passionate young people. “Education is a new concern for a whole new generation. They want to have better skills for the future.”