Going out of Business: Many Institutions are Struggling. Notice Any Red Flags? 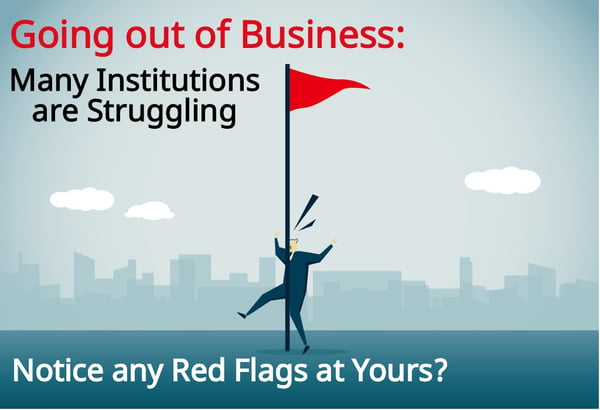 If you follow the trends of higher education, you’ve no doubt heard the prediction that 50 percent of the country’s colleges will be bankrupt in 10 to 15 years. And that perspective has been touted for the past 20+ years, so…we need to take it with some salt.

Still, we have seen an uptick in closures and mergers of late. This is worth looking at because, there is some truth to this prediction and we’d be fools to simply say, “Never gonna happen.”

There are plenty of industries that have gone through these kinds of retrenching or refocusing. In the world of Mergers and Acquisitions, any business is broken down on paper for its assets and liabilities. Assets are considered for liquidation – the idea of “selling off the parts.” This is happening in academia as well. Harsh but true: profitable departments or schools within an institution are being “adopted” by other stronger institutions while the rest of the weaker institution is shut down.

Before we all consider our college diplomas to be rare antiques, is there any way to safeguard against this trend?

Below, we share some perspective on different options being considered and some resources you may want to access for a deeper dive. Here’s one of them: Our non-traditional student recruitment ebook: Quality. Cost. Convenience. The extended edition on Intead Plus gives you marketing planning insights, sample personas along with case studies from nine very different institutions.

Next week we'll be talking about long-term vision and growth. But before we get there, we need to understand a bit more about where we are now.

Do you want the good news or the bad news first?

Clayton Christensen of Harvard Business School did indeed predict that up to 50 percent of the country’s colleges will be bankrupt in just 10 to 15 years.

Furthermore, CNBC reported that the U.S. Department of Education and Moody’s Investors Service project that in the coming years, closure rates of small colleges and universities will triple, and mergers will double.

Education consultant Michael Horn told Boston.com that it is “going to get worse before it gets better,” with the worst effects after 2026. However, he thinks the closure rate will be closer to 25 percent. 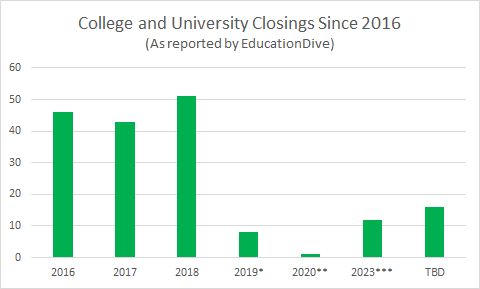 Data from EducationDive.com, click the link for a complete list of school closures since 2016.
Thank you EducationDive for tracking this stuff!

What is a "closure"?

In one way, the number of closures is slightly inflated. In the case of a merger, both institutions are considered closing, with the formation of a new entity.

There are two excellent publication from Chronicle of Higher Ed:

Available for purchase from CHE (follow the links above) and they are a bit pricey, but given all that is on the line, the research, statistics and ability to get your colleagues to wake up and smell the coffee is really invaluable. We highly recommend these publications.

Here’s a snapshot of what is going on:

It’s a mixture of financial factors. One of the costs of keeping schools innovative is the rise of tuition rates that schools implement to pay for the growth and innovation. Unfortunately, family incomes have not risen at the same rate as tuition inflation. As incomes have stagnated, alumni contributions have dropped, and some university endowments have also dwindled, lessening schools’ abilities to offset tuition fees.

Certainly not true of all our esteemed institutions, but more of them than before.

The idea of raising tuition and then discounting that cost for the majority of students has not panned out for many institutions. Raising tuition gives the false impression of being a desirable, hard to attain commodity. The discount suggests that you, the applicant, are so special that we’re willing to do almost anything to get you here. Unfortunately, the math has not worked and the messaging is not playing well with savvy consumers.

The narrative arc of colleges and universities has risen and fallen with our generations. After the GI Bill passed in 1944, college enrollment doubled, as this allowed middle- and lower-class students to afford tuition. Then as women became more prevalent in the workplace, so did their presence on college campuses. This is a trend that has continued, as now college campuses are on average 56 percent female according to The Atlantic.

The number of college students and the rate of education continued to climb through the Millennial generation. Almost half of American Millennials attended college.

While these previous generations grew enrollment in higher education, the pool of potential students is shrinking. The U.S. has had a falling birthrate for years, and it recently hit a 30-year low. Those families that are having children may not be able to afford higher education either, as the higher the family income, the lower the birth rate.

While the Millennials are the nation’s most educated generation, those of them with children may still be carrying around the weight of their own education debt. According to Inc., 63 percent of Millennials still have more than $10,000 in student loan debt.

As student numbers drop, schools must do more to be attractive. This reality has led some institutions to build more luxurious student housing and flashier and more state-of-the-art facilities, like multi-story gyms, sauna and spa facilities, student juice bars, meditation studios, rock climbing walls, or even a lazy river (you’ve seen the stories, we’re sure).

College fitness has clearly come a long way since our own university days of—you know—walking uphill both ways in the snow.

These improvements come with hefty price tags, though, and can lead to even more money woes for the institution and the students graduating with debt.

What effects do school closings have?

Not all mergers are a foretelling of doom. School mergers can provide steady (and potentially lower) tuition rates for students and the best faculty and departmental resources of two schools. Merging cash reserves and marketing strategies can also lead to stronger and more contemporary programs.

In congested urban areas, redundant programs in multiple institutions really are unnecessary, as harsh as that is to say. Where a number of schools are seeing declining enrollment and there really is no differentiation between a particular offering common to both institutions, well, these are obvious market forces that push for merger or closure. Though painful and sometimes really hard to explain to faculty who might be sticking their heads in the sand, this situation is not surprising. And we are sorry about that.

We are also realists.

The downside to school closings and some mergers is that faculty and staff are left without income. The students will, by and large, find the education they are looking for elsewhere. The downside is especially pronounced in areas where higher education is a major part of the economy, like New England.

Many small, private schools that are at a higher risk of closure are often in rural or suburban towns that depend upon the college for its local economy. That loss of jobs, culture, and vibrancy in a community sends out economic shock waves. While some schools announce their eventual closure and stop accepting new students, some shut their doors abruptly, requiring the shuffling and uprooting of students to other colleges.

What are schools doing to protect themselves?

Be careful here, as the potential “new” student and new student revenue is likely to come from the same 50 – 150 mile radius around your institution that your current on campus crowd comes from. Many less-well-branded schools enter the online arena thinking they are expanding their pool and market potential. Trust us, the spreadsheet your optimistic new market development team is producing is not telling you the full truth.

Where does this leave us?

The bottom line is that higher education institutions must be ready and they can’t think themselves immune. Senior leaders need to think about new potential student markets, how to stay relevant within their current programs, and if they need to shift their offerings based on current job skills and trends. A set of reliable, diverse partners to help you develop and execute a growth strategy is going to be important (tune in next week for more on this).

With academic institutions being so slow to change and frustratingly avoiding the market signals, we have no doubt that closures and mergers will continue to rise in the coming years. Success favors the “more” nimble. And tough times cull the weakest of the herd, always.

Here’s to hoping your institution is able to move fast enough with new academic offerings, clear differentiation and marketing initiatives that communicate those things compellingly. Making hard decisions and backing them with real investment is the way forward. That involves an element of risk, and as we know, academic institutions are highly risk averse - which is why we are seeing the closures.

Our advice: Take action. As always, we are here to help.