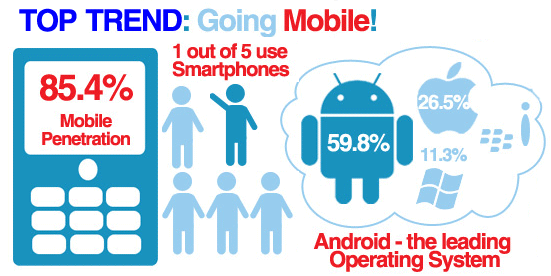 South Korea, officially known as the Republic of Korea, is one of the most connected countries in the world with high broadband penetration rates and a tech savvy population. The wireless internet is seeing a rapid rise in uptake in South Korea; the number of users of both smartphones and tablets doubled between 2011 and 2012, according to a December 2012 report from the Korea Internet & Security Agency (KISA). 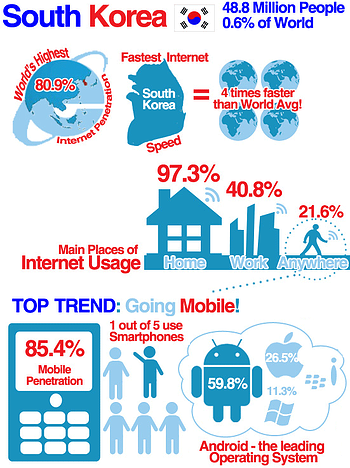 Fact #1-South Korea has the world’s fastest average Internet connection speed at 2,202 kbps. This is almost four times the world average. This can be attributed to the government’s strong infrastructural support. It is therefore not surprising that Korea has approximately 39 million internet users and boasts one of Asia's highest internet penetration rates of 80.9%. (Source: http://www.internetworldstats.com/stats3.htm#asia)

Fact #2-Most internet users access the Internet at least once a day, spending an average of 14.7 hours weekly with almost half of this group (48.9%) spending more than 14 hours or more. According to the KISA survey in 2012, South Koreans use the Internet mainly for gathering information or data followed by engaging in leisure activities. The statistic illustrates the internet usage rate in South Korea in 2011, by age groups. In 2011, 99.9 percent of 20 to 29-year olds in South Korea were internet users. More surprisingly, the internet usage rate for children aged three to nine was 86.2 percent. 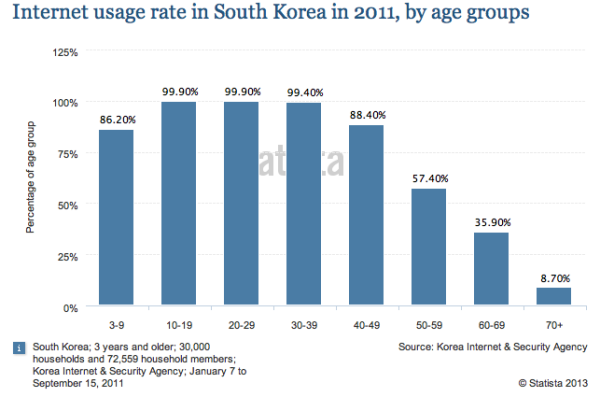 Fact #3-Mobile technologies are increasingly impacting how businesses reach their customers and clients. KISA surveyed 3,000 consumers in South Korea between the ages of 12 to 59 and found that smartphone penetration among this population rose from 39.2% to 78.5%. That is a staggering increase, which may be partly explained by the age of the consumer sample. eMarketer estimates that smartphone penetration in South Korea reached 51% of the entire population in 2012, up from 38% in 2011.

South Koreans use an array of cross platform mobile chat applications such as NateOn, Kakao Talk. Kakao Talk is now seeing more than 1 billion text messages pass across its service everyday. People send and receive a range of messages, including text, photos, videos, voice and contact information while making a free call among users. The service is hugely popular in South Korea, where almost everyone that owns a smartphone uses Kakao Talk. But it is also available in English, Spanish and Japanese.

Fact #4-South Korea is home to one of the largest blogging communities in the world, second only to China. Popular blog hosting sites include Naver Blog, Daum Blogs and so on. On the other hand, South Korea’s social media landscape is changing slightly, with some global websites finally starting to become more popular than local competitors. In February 2012, Facebook surpassed the reach of local social network Cyworld, according to a May 2012 report by Nielsen Korean. Twitter has had a phenomenal impact in South Korea with users having an active user rate two times higher than the world average.

Fact #5- The recent KISA survey found that highest penetration of social media usage was among 20 to 29-year-olds, at 89.7%, in 2011. Males were slightly more active than females on social media, at 68% vs. 64.7%. Common social media activities, however, may be surprising to people not familiar with the South Korean market. KISA found that 84% of social media users read or kept a blog, 74.6% participated in online communities (often organized by topics such as food, fashion and gaming) and 68.3% maintained a unique site called a "minihompy," which is a personalized online space such as a homepage or landing page that is associated with Cyworld specifically. Profile-based social networks (18.4%) and microblogs (12.8%) trailed the other three social media by a wide margin.

These facts are important to keep in mind as you plan your international recruitment and marketing activities in South Korea.