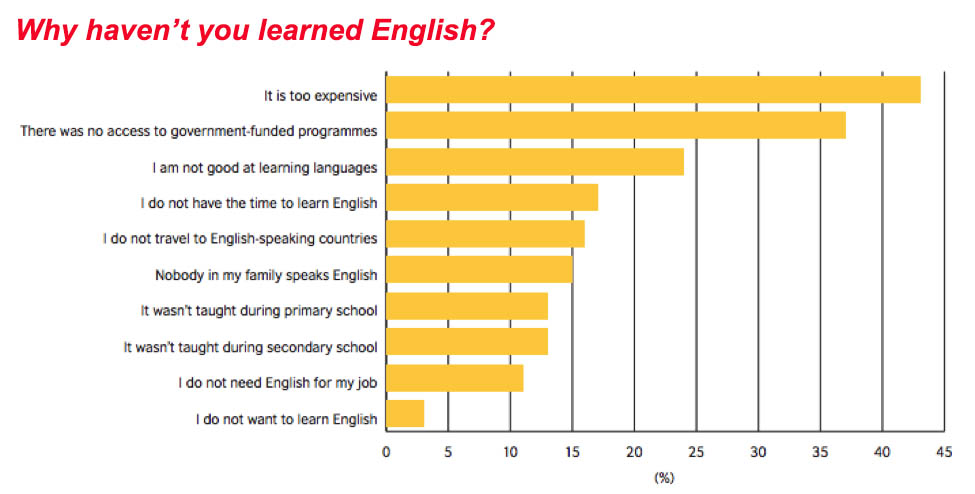 In Part 1 of this series, we discussed the potential of recruiting students in Colombia and statistics reported in the Institute of International Education’s (IIE) Open Doors report (find IIE’s report here). Although the country’s current economic state is unfavorable due to the peso hitting record lows against the dollar, Colombia’s government has placed more focus on education and as a result, more students have gained access to financial aid and scholarships.

However, even as we warm up to Colombia’s attractive demographics and international interests, there is another common issue Colombian students face when looking to study abroad. The English language remains a problem for the majority of Colombian students. But, like many other Latin American countries Colombia is working hard to help more young people become bilingual which is where marketing your English language program can help you stand out to this group of prospective students.

Bottom Line: Young Colombians seem to have a drive to learn the language that will help them improve their futures. Employers here are eager to find English speaking staff to help them do business around the world. Academic recruiters seeking Colombian students will do well to focus on pathway programs and the career opportunities a degree will foster. Finally, since university rankings are less important than affordability here, lesser-known institutions that can prove their value can do well.

Emily is ready to wrap up this two-part series with additional perspective to help you with your international student recruitment plan.

The British Council highlighted findings about English study in Colombia in their “English Language Market Report: Colombia.” The country’s ministry of education (Ministerio de Educación Nacional) began a program to promote bilingualism in 2004. The program was intended to improve the English language skills of teachers at the primary and secondary levels, to spread these language skills across the country. Though this program runs through 2019, it seems that English skills are still lagging behind in the country.

In a subsequent report from the British Council the “English in Colombia: An examination of policy, perceptions and influencing factors,” researchers surveyed Colombians aged 16 to 50 about their English language skills. Ninety-six percent of respondents were aged between 19 and 35, making this survey a good source of information for international student recruiters. The survey asked respondents to classify their English reading, speaking and writing skills. Only 16% of the respondents believed they were “fluent” or “advanced” speakers and 40% believed their English speaking abilities were “poor” or “basic”. The lack of confidence in their speaking ability shows an important issue for recruiting. Pathway and English language programs are valuable recruiting tools.

The British Council also found that the majority of respondents saw value in learning English, although the resources to do so are lacking. According to their survey, most respondents believed that English was important for employability, education and in order to communicate with more people. Employers agree, as 68% say that English is an essential skill for new employees. The hindrance to learning English in Colombia is not the desire, but the expense.

The motivation to learn English is high in Colombia, but the majority of respondents had to learn it on their own. When those who responded that their reading and writing skills were “advanced” or “fluent” were asked how they attained that level, the majority responded that they did so on their own. The majority of “advanced” or “fluent” English speakers attributed their speaking abilities to watching English language TV and movies. Apparently Vin Diesel and the Fast & Furious series feed some while re-runs of Friends and Full House are feeding others.

The interest in English language media may also be boosted by the large number of Colombians online. E Marketer reports that Colombia is on track to hit 28.6 million internet users in 2015. Of course, online trends are a large part of the recruiting puzzle. According to We Are Social’s 2014 review of social media usage in the Americas:

The predicted expansion of internet users means that getting messages across via digital marketing shouldn’t be an issue for the recruiters who target these tech savvy students. Consider: you may find better results if you post in Spanish.

Motivated to learn English and keen on social media, Daniel Saldarriaga Tirado says international travel is becoming part of the Colombian culture. Mr. Tirado directs logistics and relations for an academic recruiting and travel agency in Colombia. The increased interest in travel is evidenced by the large growth in the number of Colombian students studying in the U.S., and many other countries throughout the world. But, what gives Colombian students an extra nudge they need to study abroad?

In his conversations with the ICEF Monitor, Mr. Tirado is able to answer this question. One factor for Colombian students might be work. Because of the expense of studying abroad, places where students can work while they study are particularly interesting. Your internship program and connections to employers are going to be important to your recruitment messaging.

He also points to the importance of the family in the decision making process. For Colombian students, the decision to study abroad is a big one. The average student studying abroad from Colombia is between the ages of 17 and 25. Since many of these young Colombians have never lived on their own, it can be difficult to take the leap. Engaging families in the process might help ease jitters for students and parents. To calm the nerves of anxious parents, using Spanish will go a long way since most parents don’t speak English.

Colombian parents are also looking for bargains. The British Council’s report on the market in Colombia indicates that the majority of Colombians favor English language programs that are less expensive or in the “mid-range.” With a floundering economy, the price tag will likely start to be more and more important. Those who are willing to put in effort to speak to parents in Spanish, highlight their graduates’ career success, spend some time in Colombia to build relationships and offer programs at lower costs (scholarships) are more likely to benefit from young Colombian’s drive to improve their English and advance their careers.