Are Saudi Students Key to Your Recruitment Goals? 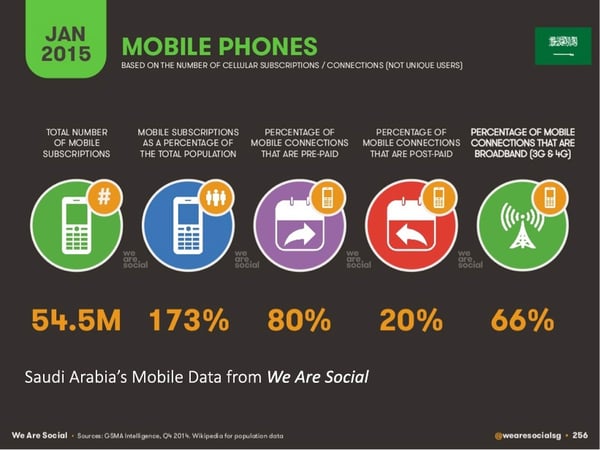 How many mobile devices do you have? You got your cell phone, your tablet… Turns out in Saudi Arabia, a heck of a lot of people have more than one mobile device, too. We Are Social reports that the number of mobile subscriptions as a percent of total population = 173%.

Yes, More mobile subscriptions than there are people! So, we’ll ask you again, as we have in so many of our posts, is your international student recruitment content mobile friendly?

Let’s get to the point of this post: Saudi student recruitment. In the last few years, students from Saudi Arabia have certainly left their mark on international higher education. With the growth of government sponsored scholarship programs, such as the King Abdullah Foreign Scholarship Program (KASP), the number of students from Saudi Arabia studying in the U.S. for the 2014/2015 school year jumped to just about 60,000. That's an 11.2% increase from the previous year, according to the International Institute of Education (IIE). With numbers like these, you should be paying close attention to this market.

And most of you are. Paying attention that is. In our conversations with our colleagues at many institutions, we hear concern. A strong reliance on Saudi Arabian students to help meet recruitment targets might be leaving institutions vulnerable. Not unlike the reliance many schools have on Chinese or Korean students. When the political or economic winds blow, it affects a significant swath of your international student population.

You are not alone in this vulnerability. So we asked Emily, our international blogger, to dig into the international student recruitment scene in the land of Saud and let us know where and how to focus our recruitment efforts. As usual, she did a great job and found some really interesting research.

BOTTOM LINE: Potential changes being enforced by the Saudi Arabian Cultural Mission (SACM), are affecting how many Saudi students are studying abroad and the funding available. However, many Saudi students are able to pay their way, independently. When recruiting in this particular market, it will be essential to brush up on your Saudi cultural knowledge and reach out to prospective students online. Mobile phone apps, YouTube content and targeted landing pages will put you ahead of the competition and help you meet your recruitment goals. There's a lot of information in this post, read on...

According to a 2011 report produced by the Wilson Center, almost 51% of the population in Saudi Arabia is under the age of 25, and two-thirds of the population is below the age of 29. This is a highly desirable market for higher ed. However, heavy reliance on KASP, backed by the Saudi government, means that any changes in their program will create an insecure market.

A Little Help with Messaging:

Let’s take a look at the last few years of recruiting from Saudi Arabia. IIE found that last year, students from Saudi Arabia contributed $1.7 billion to the U.S. economy. These were mostly (51.5%) undergraduate students. Graduate students made up 21% of the Saudi student population in the U.S. The numbers have certainly grown since 2004. In fact, this particular population has increased for the 10th consecutive year. This impressive growth is mostly attributed to the government sponsored scholarship programs that encourage students to study abroad. Still, there is some evidence that quite a few of these students have been independently funded. World Education News and Reviews (WENR) classifies 40% of Saudi students as "explorers" and indicates that they have sufficient resources to study in the U.S. And Higher Education Marketing estimates that 13% of Saudi students are independently funded.

In 2013, Hall's research titled "Saudi Male Perceptions of Study in the United States: An Analysis of King Abdulla Scholarship Program Participants," found certain themes in Saudi students' decisions to study in the U.S. Through interviews with 12 undergraduate Saudi Arabian males, he discovered that the main reasons for studying in the U.S. were:

These interviews are worth a read if you are recruiting from Saudi Arabia. Several of his interviewees suggested that their fathers had encouraged them to study in the U.S. Others mentioned having relatives who were studying in the U.S. or connections to the country because of family members. These connections were able to help them navigate the process to apply for scholarships and made them feel more at home abroad.

The respondents also saw a lot of value and prestige in the U.S. education system. They believed that American degrees were valuable in Saudi Arabia. Some even regarded an American degree as more prestigious than degrees from other English speaking countries. Of course, the advantage of studying in an English speaking nation was mentioned in these interviews. The Saudi Arabian men in this study mentioned that English is necessary for many jobs in their country. The attraction of ESL programs in the U.S. is well documented and is also a high priority of KASP.

Lastly, some of the students interviewed in this study believed that it was easier to come to the U.S. on their KASP scholarship. Almost all the interviewees mentioned that they would not have received proper funding without KASP and that the policies of KASP were key in their decision to study in the U.S.

Some in our field are saying that this reliance on KASP might become problematic. In July, IIE reported that SACM was asking more of Intensive English Programs (IEPs). Beginning in the spring of 2015, IIE heard reports of the SACM limiting the length of stay for their students and taking away their option to choose their own school. Though there has been no official comment from SACM, many are claiming that KASP will soon require a higher level of English and may begin to focus their resources on applicants who are currently working public-sector and governmental jobs.

So, with question marks placed around KASP as a motivator for Saudi students to studay abroad, what's your best bet for recruiting in Saudi Arabia? It is no surprise that recruiting in this country is going to be focused on the web, specifically the social web.

We are Social has done some incredible research about how the social market ticks in Saudi Arabia. It shows that internet has a 68% penetration in the country. In a country of 31.5 million, 9.2 million are active on social media. These numbers are still growing. Since June 2014, the number of active internet users has increased by 28% and the number of active social media accounts has increased by 21%. You can count on this: everyone in Saudi Arabia with the potential to study in the U.S. is online.

However, the most concrete case to be made for using social networks to connect with Saudi students comes from the amount of time they spend with media. Among those who use the internet, they spend an average of 4 hours and 14 minutes surfing the web from their PC or tablet. Mobile internet users spend an average of 4 hours and 13 minutes on the internet via their devices and social media users spend 3 hours and 2 minutes checking out their social media.

47% percent of the population is online via their mobile devices. What's more important for you is where this traffic is going. We are Social breaks down the data to determine where the larger shares of web traffic are found.

Saudi Arabia is one of the largest social media markets in the Middle East. According to The BBC, this country holds more than 40% of the Twitter users in the Arab region. 10% of the Arab region's Facebook users come from Saudi Arabia and it has the highest per-capita YouTube use of any country in the world.

Yup, that's huge! So let's say it again: Saudi Arabia's YouTube usage per capita is the highest of any country in the world! If that doesn't give you incentive to improve your YouTube channel, we don’t know what will! 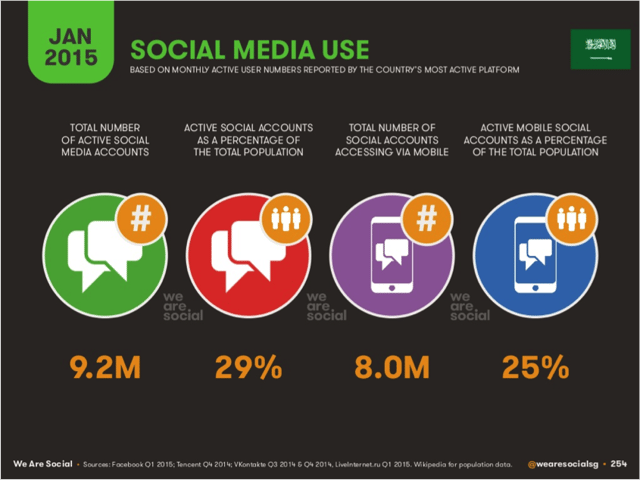 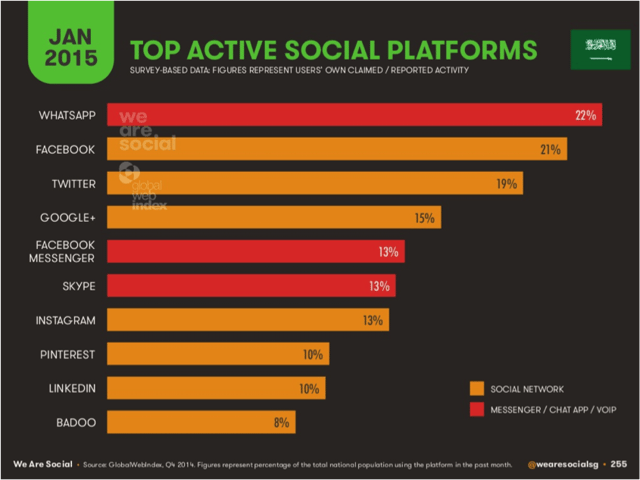 Of course, social media isn't the only way to get these students to your campus. According to Higher Education Marketing, targeted webpages help set you apart. Not only do they give you the opportunity to show that you care about one specific population of students, they also give you the chance to share testimonials or stories in Arabic. While we regularly push to see translated materials available to international students and their parents, this is one region where that move is just a bit less critical. That said, making the effort shows a level of respect and connection with your potential students. Do you think that will put you ahead of the competition? Uhm, YES!

As we mentioned before, familial ties are a huge factor in Saudi students' decisions to study abroad, so ensuring that material is easy for the whole family to read can help secure a new recruits. Have we convinced you to translate your content yet?

What To Do Next?

Another fundamental difference between U.S. education and education in Saudi Arabia was documented in Hall's dissertation research. During his interviews, some students expressed how difficult they found writing assignments. Not only because they were writing in a second language, but also because they hadn't written papers before. They contend that most learning in their home country is done through reading and memorizing. This might account for some of the issues institutions have had with plagiarism. As always, proper orientation, academic support services and an understanding of cultural differences can go a long way in helping students succeed and feel at home away from home.

So, while potential changes to KASP might make recruiting from Saudi Arabia less stable than it has been in the recent past, culturally aware social media, YouTube videos and targeted landing pages are the way to go in this market where such a large segment of the population is young and eager to learn about the world by studying in the U.S.