Some College, No Credential, Open Opportunity 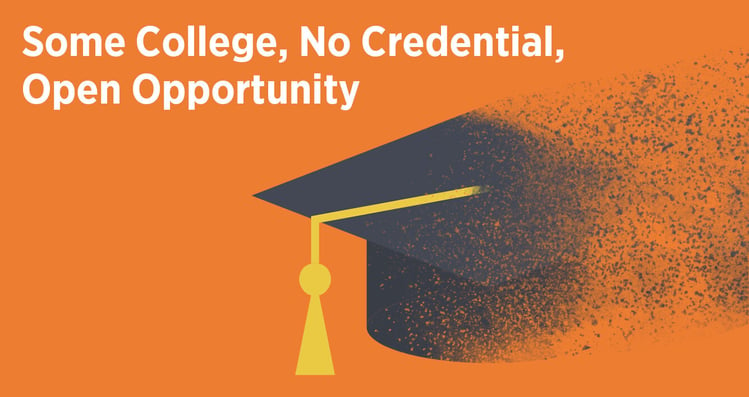 Consider the fact that postsecondary institutions have lost nearly 1.3 million students over the course of the past two years. And last year over 940,000 “Some College, No Credential” students re-enrolled. Do the math.

The National Student Clearinghouse Research Center issued its latest “Some College, No Credential Student Outcomes” report, and the numbers are as you may expect. Large.

Based on July 2020 headcount, the NSC shows there are now 39 million people who can claim some-college, no-credential (SCNC) status—up 8.6% from 2019. In real-time, though, we are confident those numbers are even higher.

Look, we don’t need to tell you that we just wrapped up the fifth consecutive semester of declining student yield. After all, you’re knee-deep in recruitment expectations right now. And those of us working with the undergrad population, well, we’re down about 1.4 million students since 2020.

We are all feeling that and struggling with how all those predictive models seem to be anything but predictive right now. Weren’t they supposed to help us all hone in on growth? A few assumptions there need to be recalibrated.

But, there’s a story in this latest data that may be more optimistic than the doomsday headlines would suggest. Per various pundits’ predictions, a recovery rise in enrollment is on the horizon along with the demographic shift that points to an overall decline in the number of high school graduates. The SCNC crowd represents a significant opportunity that is so often overlooked as traditional recruitment efforts focus on the fresh out of high school crowd.

For the SCNC segment (a rather large segment that requires further segmentation -- they are not one block with common traits), it’s a matter of finding them and presenting your institution’s distinct opportunities to them. They clearly have different motivators and a different decision-making timelines than high school graduates.

Taking a closer look at the National Student Clearinghouse SCNC report – the third in a series – you’ll find that it quantifies the population growth of this large student subset and identifies levels of opportunity for re-engaging these one-time students. Sound interesting? It should if you’re looking to boost enrollment.

Unlike previous reports, this one tracks:

So, lots of good stuff.

For our key takeaways on SCNC prospects including best-bet recruitment opportunities, read on. And for actionable inspiration on how to woo this important crowd, check out our ebook: “Quality. Cost. Convenience.”

What others are saying: This must-read primer will help anyone looking to better position their institution within today’s complex and competitive recruitment landscape. This is your guide to adapting to the new competitive environment.

The National Clearinghouse report, which can be found here, notes that over a quarter of freshmen do not return for their second year. At community colleges, it’s 41%. That’s a whole lot of individuals who have expressed interest (and have taken action) in pursuing higher education. Not all want to go back, but some do. A lot, actually.

So, what does the report reveal about the nation’s SCNC students?

Who they are. More women than men re-enroll, with younger women re-enrolling 1.5 times more often than men. Most SCNC students were younger than 35 when stopping out, and men were typically younger when they did.

Where they live. Over one-third reside in California, Texas, New York, and Illinois, though Alaska has the largest number of SCNC students per 1,000 currently enrolled undergraduates among all states. Sub-baccalaureate credential earners were predominant in the South (76.1%). The Northeast had the highest rate of bachelor’s degree earners (46.2%) 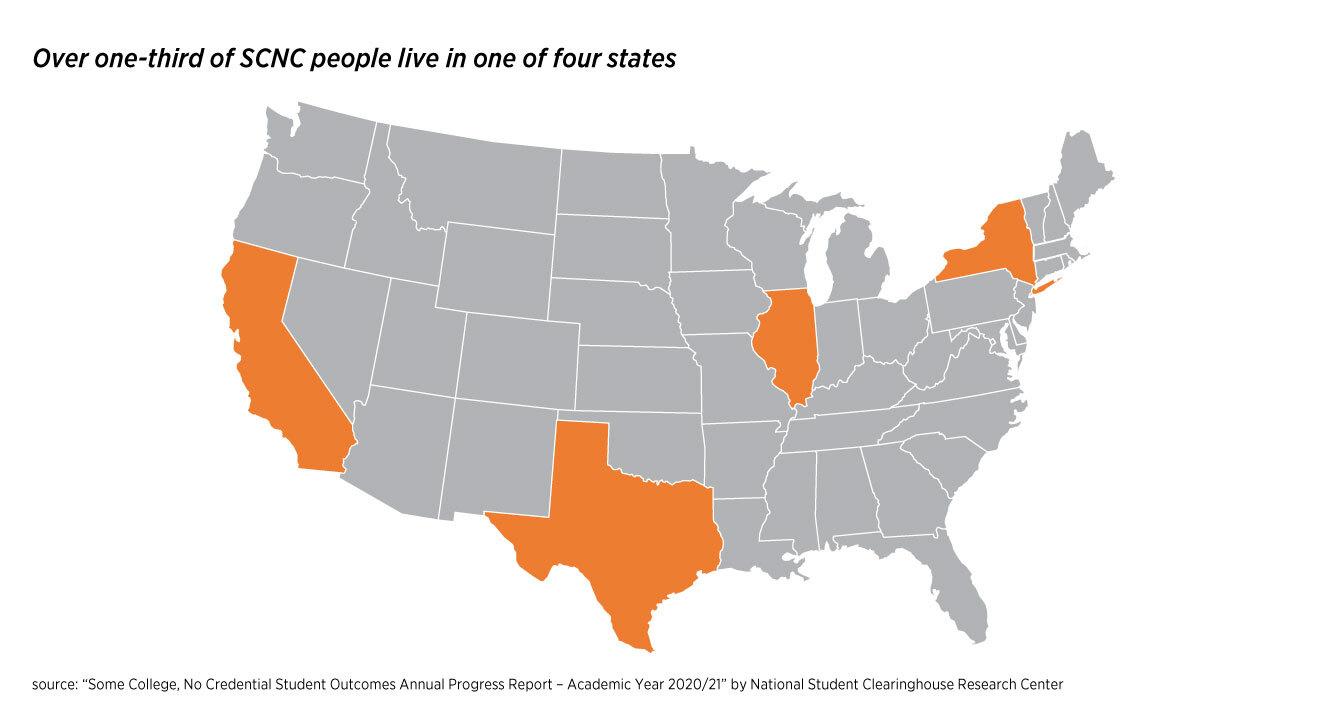 Where they go. A few useful stats:

The NSC presents the re-enrolled pathways nicely in this graph: 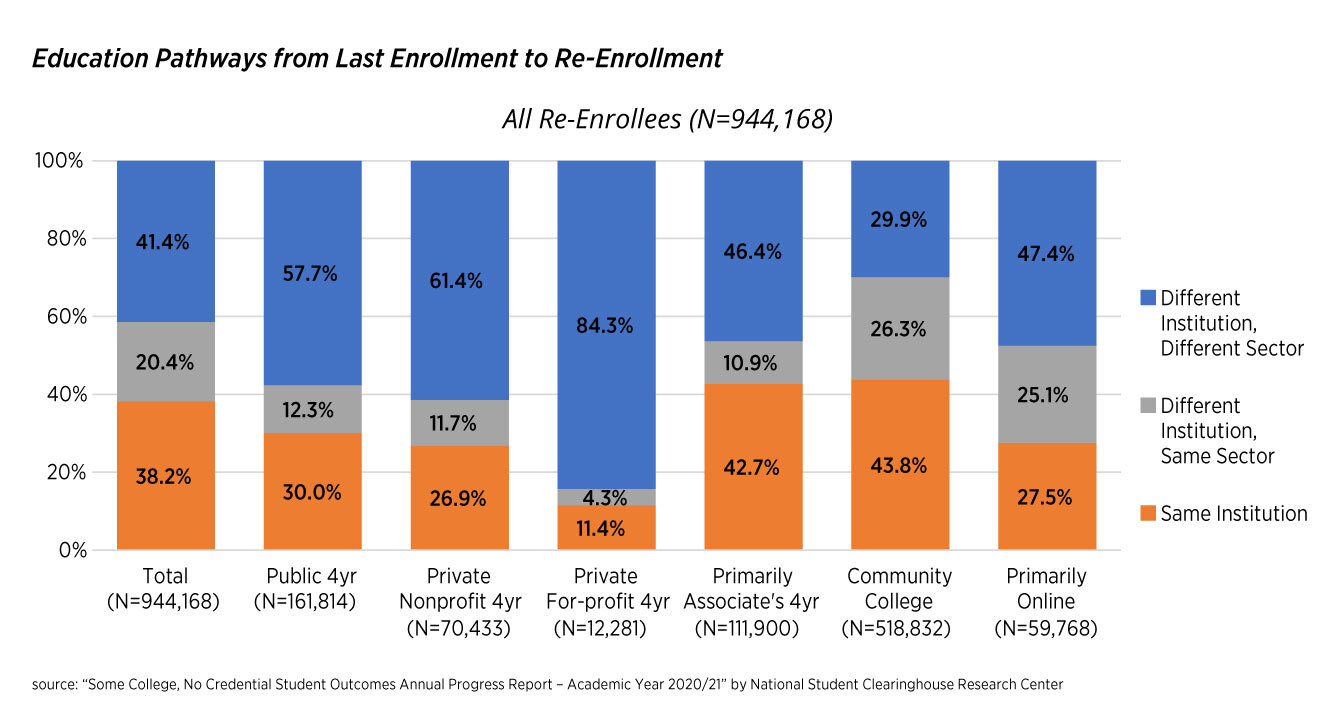 What they do. SCNC re-enrollees and credential earners pursued and completed the most common college majors—liberal arts, business, health care. Notably, re-enrollment rate did not vary much across race and ethnicity. But, Latinx SCNC students skewed toward associate degrees (42.5%), Black students were most likely to complete a certificate (42.7%), and Asian and white students were most likely to continue with the degree program once re-enrolled.

Your To Do’s: Using this data to improve your student yield

This latest report gives you quite a bit to work with. Without even looking at your own student population or SCNC profiles, you can begin to build a strategy around the most likely non-traditional students. Women. Under 35. Particularly community college stopouts. And you know which programs to promote: the most common and practical degrees you offer. That’s just to get you started.

Next up, develop the creative approach that will speak clearly and convincingly to this audience in your region (a local radius for this campaign will be the most successful). To do this well, you’ll want to flip through our ebook if you’ve not already downloaded it and picked through its gems. Note: the extended version of our ebook on Intead Plus gives you a marketing plan and student personas to get you far down the road really quickly.

Is it time to rethink your nontraditional student strategy? We think, yes. Be in touch.