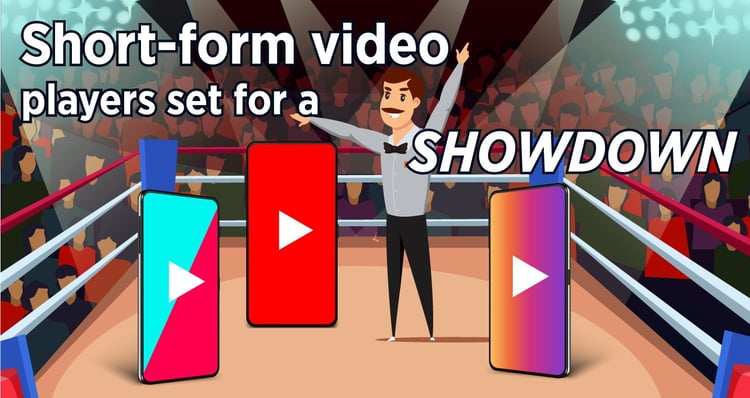 When it comes to marketing, content is king – but distribution is queen and the right channel matters. Smart marketers know to go where their target student audience lives, learns, and connects online.

With recruitment travel off the table for 2020, it's time to get creative in how you reach (attract) and convert student leads. Up-leveling your digital efforts will be essential as you plan for your Spring and Fall 2021 cohorts. Your challenge: translating those engaging IRL recruitment experiences, think on-campus tours, student fairs, sample lectures and the like, from people to pixels.

Luckily, your Gen Z prospects have a particular penchant for a certain type of  content that lends itself very well to the digital reproduction of in-person experience: video.

According to Think with Google, 71% of Gen Z teens spend 3+ hours per day watching videos online. Competition for eyeballs is fierce, to say the least, especially in the newly crowded short form video arena. TikTok is the it-app. Instagram wants its Reels to be the vanguard of viral video tomorrow. Or, wait, will it be YouTube’s Shorts? Or Bytes? Knowing which content belongs where is key to brand awareness and conversion.

We don’t have a crystal ball, but we do know a few things for sure:

We also know that the student recruitment and enrollment marketing rules have changed as of 2020. So, of course, we wrote an insightful ebook full of perspective and recommendations. The downloads have been pretty steady since we launched it a couple weeks ago. If you are not among them, click here.

There is no question that video is the future, but predicting where that video will live is still uncertain. Will TikTok users quickly adopt Instagram Reels? Maybe. Where should you invest your ad dollars? That’s a larger discussion.

Read on for our perspective on each of these video-sharing platforms to help you weigh your options.

TikTok is the current king of video-sharing apps.

Downloaded over 2 billion times worldwide, TikTok reaches over 150 markets in 75 languages with over 800 million active monthly users. Of those, it’s estimated 85 million are in the U.S. with a 3:2 female-to-male ratio.

Users skew heavily toward Gen Z, with those aged 13 - 24 accounting for 69% of the user base.  In June alone, the app was downloaded 87 million times globally (7.5 million in the U.S.) – more than 52% increase from June 2019. Not only are people installing the app, they are devouring it. ByteDance, TikTok’s China-based owner, has said U.S. users open the app eight times a day and that individual sessions last about 4.9 minutes—longer than user sessions on Facebook, Instagram and Snapchat.

The marketing opportunities are starting to become more clear, right?

Sharing authentic and engaging experiences is the core purpose of the platform and a range of young influencers have built robust online communities that can drive brand awareness. Rochester Institute of Technology is one of the many higher education institutions using the platform to connect with prospects and current students alike.

RIT's TikTok videos collectively boast nearly 1M likes and deftly combine education and engagement, including COVID-19 updates from public safety, student-created dance challenge welcome messages, and program spotlights. While only a year old and with only 23 videos as of this post, their TikTok account has already gained 56.7K followers. For context, that's over double their follower count on Instagram where they've posted nearly two-thousand times. How's that for an effort-engagement payoff?

But TikTok is not all song and dance. India recently banned it after claiming China was stealing user data in an unauthorized manner. The White House has ordered a ban on U.S. firms conducting business with TikTok and demanded that China-based ByteDance divest its TikTok operations in the US within 90 days. For now, this popular app is working to please both consumers and global politics, but time will tell if TikTok can weather the political storm. In the meantime, we recommend brand marketers review all their options.

Instagram Reels is Facebook’s answer to TikTok and a bit of a copycat but, not to be outdone, it boasts enviable and instant direct access to Instagram’s more than 1 billion monthly users, 130 million in the U.S. And while Facebook is facing political hurdles of its own, they may be lesser than the politics facing TikTok.

Reels, like TikTok, allows users to create 15-second video clips and share them with the aim of going viral. Users access Reels right inside the Instagram app and from there the experience is a lot like TikTok. Facebook first tested Reels in Brazil last fall, rolling it out to more than 50 countries, including the US, this summer.

According to SproutSocial, Instagram is the most important social media channel for influencer marketing, followed by YouTube. We are watching closely as Reels leverages this social powerhouse to take it to the next level. So far, what we’ve seen in the platform is a lot of people uploading old TikToks onto Reels – an account reached almost 80,000 followers with only a little over 700 posts—and it’s been less than a month since the official launch. Definitely something to watch.

Byte is another short-form video platform by the developer of the now-defunct Vine (from Google). It’s got a fan base nostalgic for Vine, but we aren’t so sure if it can take on the likes of TikTok or Reels. Unlike TikTok’s 15 – 60 second timeframe, Byte is banking on the Vine-like 6-second loop. We don’t think it has the potential staying power to take on TikTok that Reels has, but we’re keeping a close eye on it.

YouTube is expected to launch its own response to TikTok later this year as a feature – you guessed it – right inside its mobile app. We are closely monitoring development, as the power of Google, YouTube’s owner, is one to behold when you think about driving traffic based on keyword searches. Instagram and YouTube will be a fun battle to watch, for sure – both fighting for their own value in the Influencer Marketing space.

Digital marketing is never boring, and we love nothing more than to talk shop. What’s your take? Share your opinions and comments here or drop us a line if you want to learn more about how the Intead team leverages video to engage student prospects on a wide range of channels.