Hey Academic Marketers: Did Apple just bite into your audience? 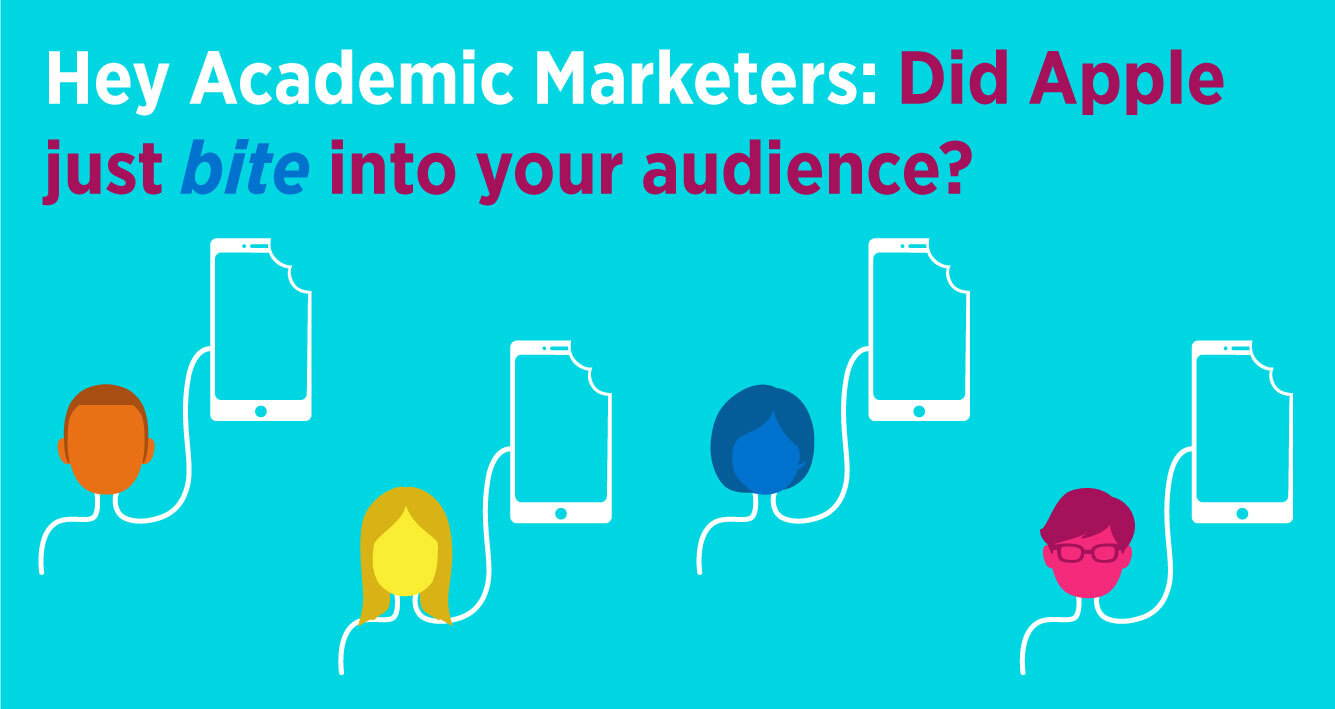 You’ve got to hand it to Apple – everyone’s paying attention to their iOS 14.5 update. At least, those of us in marketing.

This typically benign move (yawn…another update) has Facebook screaming, “Alert: The sky is falling!” In our experience, most marketers have had their Chicken Little moments over the years. Some more than others. Remember when the movie industry thought VCRs were going to decimate their revenue stream? Or how about Y2K?

But what exactly is it that’s got everyone crying foul (er, fowl)? In short, data. Or, lack thereof.

The new update aims to add transparency to user data tracking. All App Store apps are now required to ask users for permission to access the Identifier for Advertisers (IDFA), a unique tracking code for mobile devices. So, each time an iPhone user downloads an app from the Apple Store, they must actively opt-in to be tracked. If they don’t, the policy prohibits certain data collection and sharing. Apple is positioning the move as protecting the consumer.

Early word from Flurry has it that 94% are opting out. That number is a big deal to businesses who’ve come to rely on this data to optimize, target, and report on tracking pixels, the bits of code that detail user behavior. It’s certainly a big deal to Facebook and Google and to those of us who rely on their insights.

Truthfully, prior to this iOS change, iPhone users already had the ability to opt-out of IDFA, but this move by Apple prompts and forces a user decision and almost everyone is opting out.

While the change only affects Apple’s mobile audience (leaving desktop and Android users alone), that’s still 1 billion active iPhones worldwide, one-fifth of which are in the US. (iOS has notable but significantly less presence in key international student recruiting markets with 44% market share in Saudi Arabia, 36% in Vietnam, 27% in South Korea, 22% in China, 13% in Brazil, 8% in Nigeria, and just 3% in India, per Statcounter GlobalStats.)

As this policy takes hold, academic marketers will have much less insight into the iOS users who are clicking on apps. That inhibits the ability to micro-target, which is a problem.

To know for sure the significance of the iOS update on your campaigns, institutions should compare the percent of traffic that engages through mobile, then the percentage of those who use iOS. This is all readily available through your Google Analytics. The higher the number, the greater the impact the iOS update will have on you. Your lead generation efforts will be affected, but we imagine less so than say e-commerce businesses (think Amazon, Etsy, Target, Best Buy, etc.).

Of course, this isn’t just about privacy. It’s also about money. The big tech players are competing with one another for your ad spend. Remember, Google makes over 80% of its money on advertising, as does Facebook. They want to maintain control. Can we blame them? (Yes, of course we can, and do. Nevertheless…).

And that’s the bigger picture. Marketers who feel like the sky is falling feel that way because they are losing some control over the crux of their campaigns: their audience and their ability to define and target them. The risk the Apple update poses to your institution is your diminishing ability to reach desired audiences accurately and affordably through paid digital channels – primarily in the US.

So, while the sky may not be falling, do read on to learn how your academic marketing team should respond… 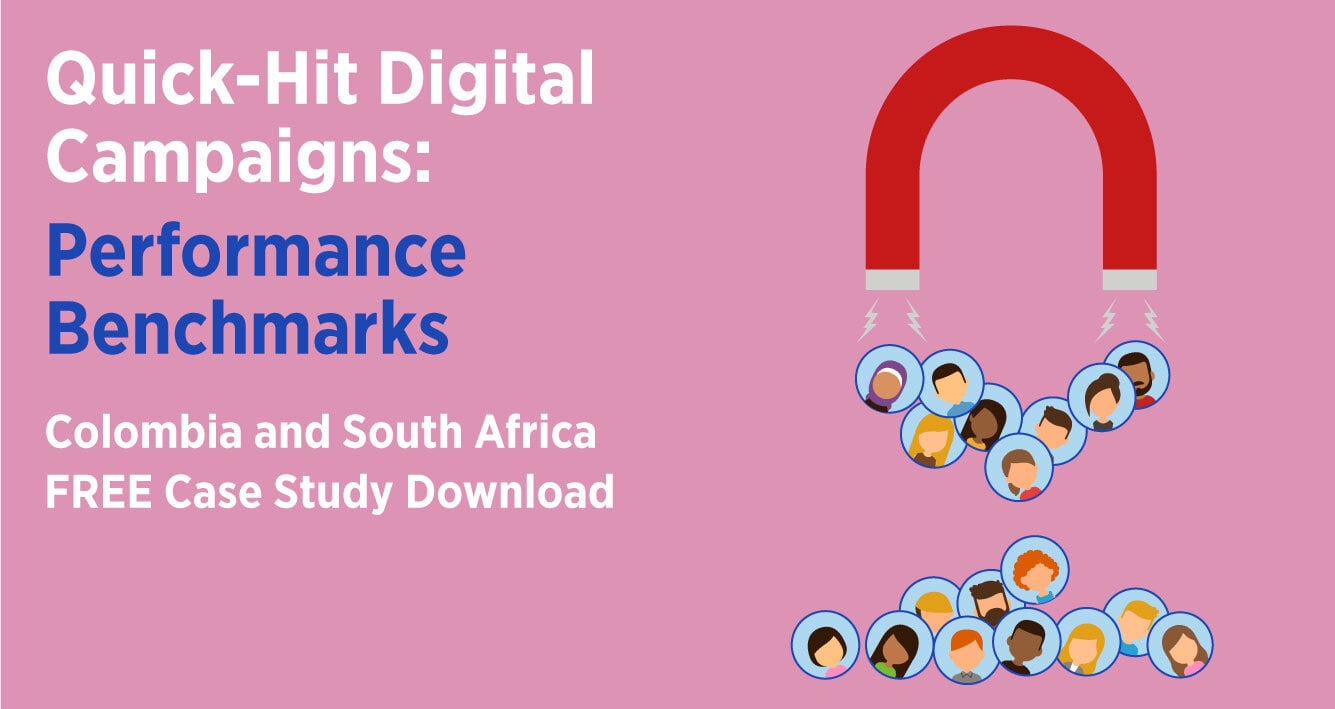 We can’t dive into our digital marketing insights this week without first acknowledging where we are right now here in the US. As human beings, we share an acute craving for security. Such a strong desire for a return to “normal”.

This desire for safety cannot stand in the way of our need for change. We, as a community, stand for diversity of thought, culture, and expression. We stand for academic exploration and shared knowledge.

Our team brings the fortitude and commitment to stand day after day and stare straight ahead. We will continue to embrace opportunities to be in this community together, with each other and for each other.

Remember where to look when you need support and encouragement. Courage grows with numbers. We will be here, standing up for our shared ideals for as long as we are able.

And with that weighty and heartfelt commitment to all of you, we will turn to the business of the day with a much lighter tone—

We don’t usually endorse cheating off your neighbor’s paper, but today, we’re making an exception in the spirit of moving us all forward.

We’re excited to share this work with you: actual digital marketing campaign results from a campaign we recently ran for a US institution targeting international student prospects in Colombia and South Africa. We’re offering you a case study with real, granular detail straight from our marketing dashboards to help you answer digital marketing’s most common questions:

Read on for a case study snapshot and to download the full version for yourself. We’re talking real performance data here, including top performing creative assets, actual CPC, CPM, and conversion data, and more. 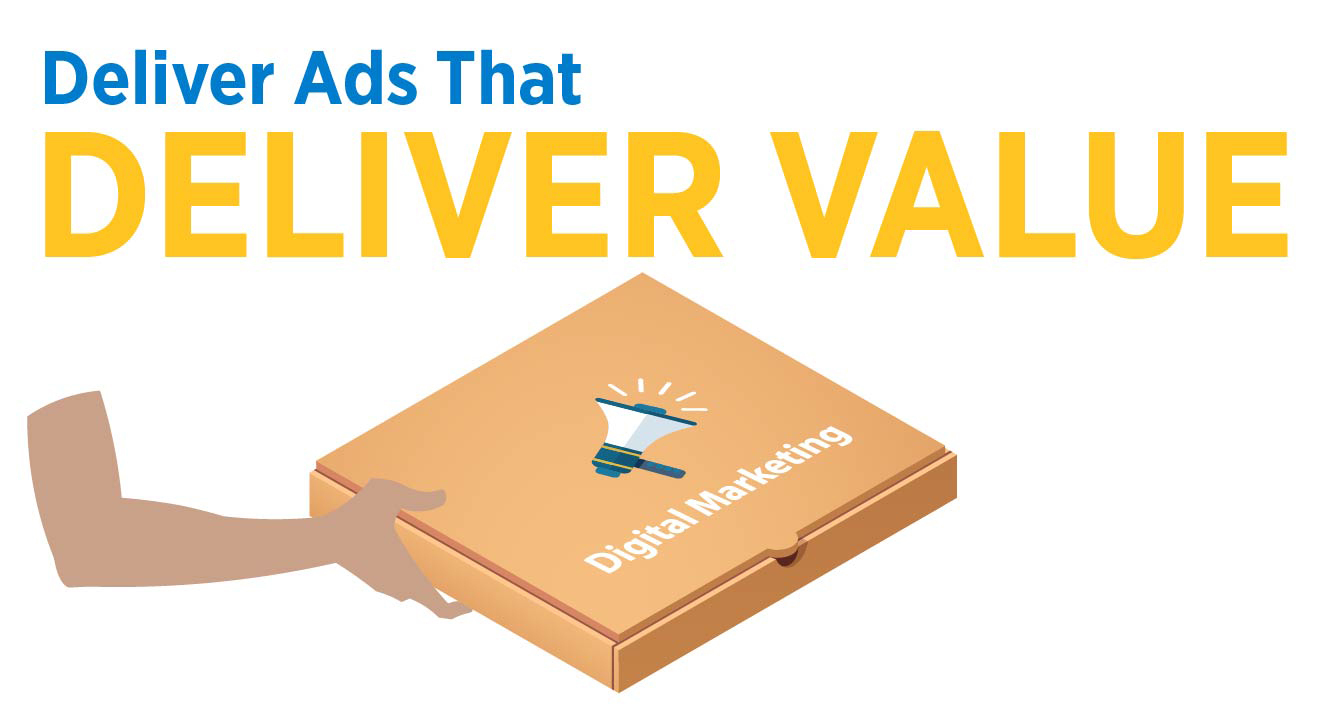 You have your smiling student photos, a brief headline, and a budget — what could possibly go wrong?

Reality: if creating an effective student recruitment ad campaign were as simple as “insert pretty campus photo here,” digital marketing agencies like ours would be out of a job. And we know what happens when that pretty campus/smiling student photo gets in the way of effective advertising…those in control stem the flow of dollars to your digital marketing budget. Will the challenges to your student recruiting ever end?

Why is it so hard?

Content drives interest, from the first point of contact (attraction) to the conversion events that drive student enrollment.

Your prospective students face an onslaught of information. In a recent Facebook survey of its global users, 43% of Gen Zers reported that they find it difficult to choose what to watch, listen to, and read. With brands clamoring for digital attention on all sides, it’s harder for you to stand out and harder for your target audience to make sense of all this noise. Enrollment marketing is a highly competitive sport.

All the more reason that your ads need to add value to your audience. Your ads must capture the attention of the high-quality leads that convert, not those that click and go nowhere.

Read on for our 3 top tips for creating ads that resonate. We love talking about this stuff, so if you’re looking for more help on refining those campaigns, you know where to find us. 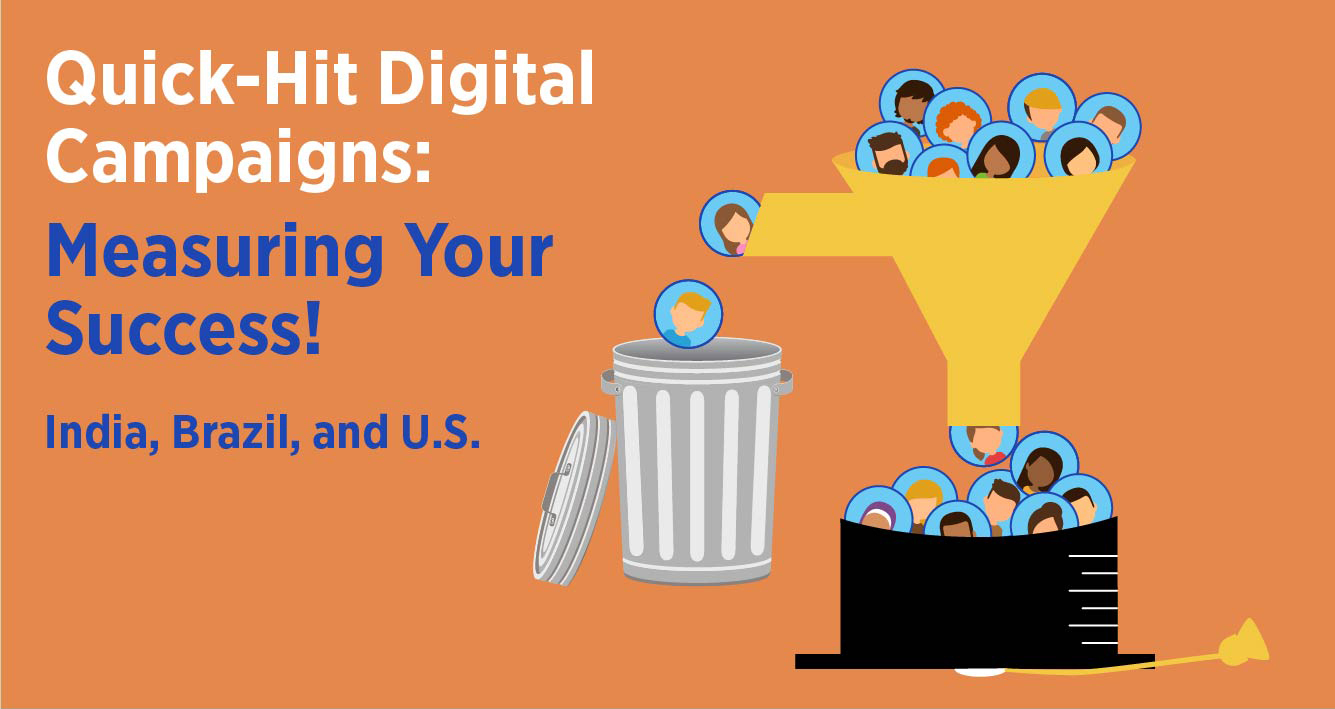 Listening to a radio interview this past weekend, I heard a fantastic analogy from a recording artist describing why she collaborated with others on her most recent album:

When you go to the playground and bounce the ball off the wall by yourself, you know how it will bounce back to you.

Collaborating with other talented people produces more than you can produce by yourself. And it often produces the unexpected bounce that takes your project to the next level. Today we will look at a digital marketing case study for a campaign we ran in India, Brazil, and the U.S.

This is our second post in our enrollment management series addressing the question of how much of a media budget do you need to succeed with your digital student recruitment campaigns?

The answer: Benchmarks are the signposts to improvement and success. When you run campaigns, you capture the data that tells you how to improve. Collaborate with us and we will help you get the desired campaign bounce (not bounce rate – that’s something entirely different ; -)

We are providing our community with case studies offering a level of detail you simply do not find out there. We look at case studies offered up on other websites and often we are perplexed by what their definition of “case study” is. What we are providing: actual campaign results to help you know if you are doing things right.

Our recent enrollment marketing campaigns for a range of institutions have targeted student audiences in Kenya, South Africa, Ecuador, Colombia, Brazil, Italy, France, India, and of course, the US. Campaigns on the horizon will target recruitment stalwarts: China, India, and South Korea as well as Australia and Canada.

Pro tip: you’ll want to share these posts with your team. Better yet, get them to subscribe to our blog.

And here is a link to last week’s Intead Blog and Case Study about Kenya and Ecuador in case you missed it.

Read on for perspective on the talent and budget needed to make your next digital student recruitment campaign even more successful. 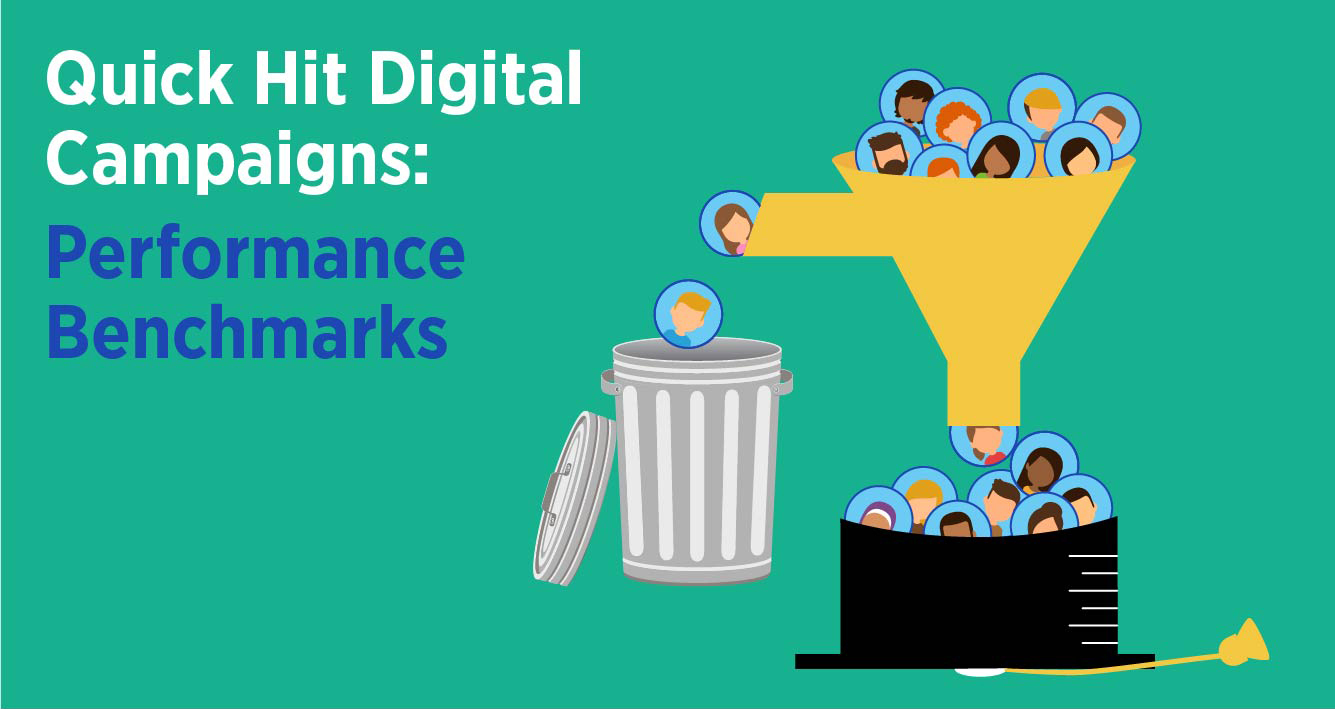 How much of a media budget do you need to succeed with your digital student recruitment campaigns?

The answer: Benchmarks are the signposts to improvement and success. When you run campaigns, you capture the data that tells you how to improve.

For the next few weeks in this enrollment management series, the Intead team will share what marketing agencies rarely, if ever, share publicly: real campaign results to help you know if you are doing things right.

Just looking at some of our recent enrollment marketing campaigns for a range of institutions, we have targeted student audiences in Kenya, South Africa, Ecuador, Colombia, Brazil, Italy, France, India, and of course, the U.S. More campaigns on the horizon will target recruitment stalwarts: China, India, and South Korea as well as Australia and Canada.

Do you see any of your target audiences in this set? Thought so.

Pro tip: you’ll want to share these posts with your team. Better yet, get them to subscribe to our blog.

Read on for perspective on setting leadership’s expectations for future success, what to throw into a campaign (talent and budgets), and the real, detailed benchmarks to measure your performance. Yes, all of that (but you have to read to the end to get it ; -)